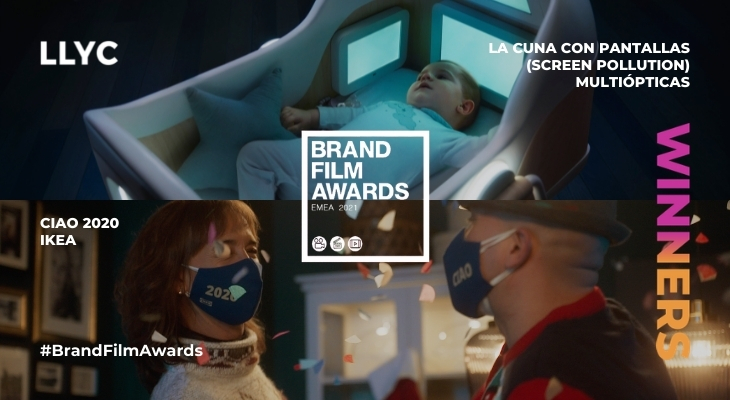 LLYC keeps adding to its list of international awards with two more from the prestigious Brand Film Awards EMEA 2021. Its winning campaigns were “Ciao 2020” for IKEA in “Behind the Scenes” and “Screen Pollution” for Multiópticas in “Best Use of Digital/Social Media”. Ciao 2020 was carried out by the firm’s Talent Engagement and Creative Studio teams, while Screen Pollution was done by the Consumer Engagement and Creative Studio teams.

This international event – one of the most reputable around the globe – is organized by PRWeek and Campaign US, two of the world’s most influential coomunications industry publications. The Brand Film Awards highlight insdustry quality, creativity, and innovation through storytelling. This year, the winners were announced via an event broadcast from the Awards’ website. Once again, LLYC was the only Spanish consulting firm nominated.

“These awards are an incentive for us to continue focusing on powerful stories that surprise, entertain and know how to read the context to generate engagement, whether among consumers or employees,” stated David González Natal, Partner and Senior Engagement Manager at LLYC.

Meanwhile, Ana Folgueira, Partner and Executive Manager of Creative Studio for LLYC, says, “Creativity is one of the firm’s hallmarks, and it gains strength and meaning when we receive this kind of recognition. Italso encourages us to look for new ideas every day.”

LLYC has already won several major awards in 2021. Last week, the PRWeek Global Awards recognized it as the “Best Agency in Europe.” The “Invisible Solitude” campaign, done for BBK, was also recognized as the “Best Campaign for a Non-Profit Organization” after winning four bronzes at the CLIO Awards in April. LLYC also recently won 15 awards at the Communicator Awards organized by The Academy of Interactive & Visual Arts in New York.