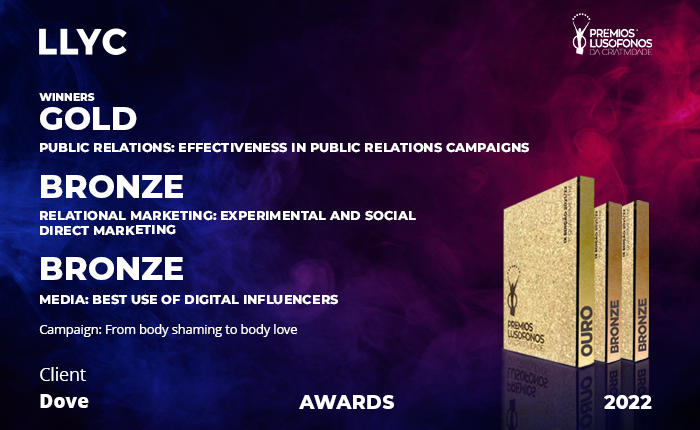 The campaign created by LLYC Lisboa’s Consumer Engagement team together with Dove “From Body Shaming to Body Love” was awarded a Gold in the Effectiveness in a Public Relations Campaign category and two Bronzes in the Relational Marketing categories at the latest edition of the Os Prémios Lusófonos da Criatividade: Experimental Direct Marketing and “Social Media: Best Use of Digital Influencers”.

The project, launched in May of this year, aimed to raise awareness of the impact of body shaming on women’s self-esteem, a cause closely linked to the brand that has been conquering the “Real Beauty” territory since 2004, ensuring that all women enjoy a positive beauty experience.

Winning the Lusófonos Creativity Awards shows the company’s commitment to communication and transformative creativity as the core of its campaigns, reinforcing the company’s positioning in Portuguese-speaking countries.

Aware that body shaming is a real problem that also negatively affects women’s confidence, Dove launched “From Body Shaming to Body Love”, an international campaign that was adapted to the Portuguese market, with the support of LLYC in developing the communication strategy. The campaign was communicated in two phases, responding to the needs of two different target audiences.

The results of the pioneering study conducted by Dove on Body Shaming in Portugal were published, with the aim of raising awareness of this problem. The study concluded with the shocking figure that almost two-thirds of Portuguese women (64%) have suffered or are suffering from bodily insults.

After analyzing this problem, it was necessary to make consumers aware of Body Shaming through real examples that would allow them to experience what the victims of these behaviors feel. The exhibition “From Body Shaming to Body Love” was held at the Central Plaza of the Colombo Shopping Center, where the real life stories of 13 women (6 of them public figures/influencers), who agreed to expose the insults they had received because of their physical appearance, were put on display.

The exhibition was very well received, attracting a total of 150,600 visitors. As an interactive exhibition, visitors had the opportunity to leave positive comments on the photographs of the 13 women, thus contributing to transforming body shaming into Body Love.