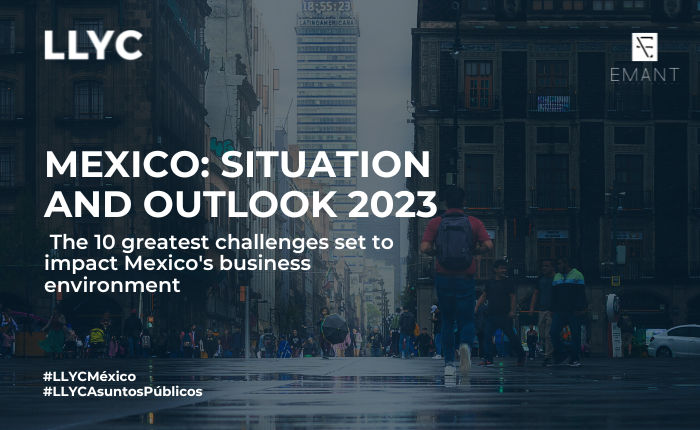 With just over two years to go until President López Obrador’s administration comes to an end and the sustainability of the self-styled “Fourth Transformation” is defined, Mexico is going through a complex scenario characterized by a climate of uncertainty for the private sector. Thus begins the report “Mexico: Situation and Outlook 2023” drawn up by LLYC, a global firm specializing in communications, marketing and public affairs, in collaboration with EMANT Consultores.

Mauricio Carrandi, Managing Director of LLYC Mexico, predicts that “we will witness public decisions increasingly oriented towards an electoral logic, which will continue to open fronts in the operation of organizations, increasingly cutting the margins for reaction and adaptation.”

After a multidisciplinary analysis, specialists identify and study the 10 most relevant risk factors in Mexico this year, ranging from the economic perspective to the digital conversation on social issues. LLYC provides organizations and individuals with the opportunity to analyze these risks in a timely manner and thus gain greater margins for anticipation and prevention so as to have an impact on a favorable environment.

In turn, Marilyn Márquez, Director of Public Affairs at LLYC Mexico, insists that “managing the context and not just reacting to it will allow organizations to face the penultimate year of the Obrador government with greater certainty in the face of a significant increase in radicalization in all spheres of national life.”

After three years of consecutive editions of this Report, these are the 10 topics that make up the risk agenda for 2023, and that shape the scenario in which organizations will operate:

1. Economic situation and outlook: The global trade reconfiguration resulting from Russia’s invasion of Ukraine has caused not only shortages and inflation in Mexico, but also a lagging growth. It is unlikely that the structural conditions of the Mexican economy and current public policies will help overcome this challenge successfully and quickly.

2. Institutional weakness and degradation of democracy: The political situation has been characterized by the dominance of a pro-government narrative that blurs the separation of powers and counterweights, as well as the autonomy of autonomous agencies, generating concerns about the democratic state.

3. Local electoral process in 2023: The procedure and results of this year’s state elections could highlight the weaknesses of Mexican democracy in the face of hyper-presidentialism and the mobilization capacity of the ruling party, while also serving as a preamble to the 2024 presidential elections.

4. Presidential succession: This is most likely the topic that will monopolize the most space in the public and political agendas, which could generate tensions within Morena and divert attention from other issues of public interest that are fundamental for a positive balance of the six-year term.

5. Militarization: A strengthening of the role of the Armed Forces in non-security activities could become one of the main concerns of the population and civil society organizations, since it would limit transparency and accountability in key sectors of the public sphere.

6. Rule of law and crime incidence: Even though the empowerment of the military corporations arises from the need to combat insecurity, the figures indicate that insecurity has increased in some aspects such as corruption, homicides or fuel theft, which in turn has led to an increase in the levels of impunity and economic losses.

7. U.S.-Mexico Relations: Despite the dialogue to address energy consultations within the T-MEC and differences over President López Obrador’s agri-food policy, the failure to reach a resolution earlier this year during the North American Leaders’ Summit tests the relationship and increases uncertainty in the private sector of both countries.

8. Social pressures: Governmental neglect of issues such as access to health services, progress on the gender agenda or the high cost of living are some of the issues that threaten to increase the evident social tensions in the country.

9. Water crisis and availability of natural resources: Climate change and water scarcity, as one of its consequences, have put vulnerable populations at risk and evidenced the need for the federal government to promote strategies that provide water security, such as the creation of a new General Water Law with a focus on human rights.

10. Digital activism and polarization: The growing relevance of digital activism in Mexico has put at risk the way conversations are guided and ideas are conditioned. Issues such as freedom of expression, feminism or racism are some of the most polarizing in Mexico, and the risk lies in not fostering unbiased and unprejudiced interaction in society.