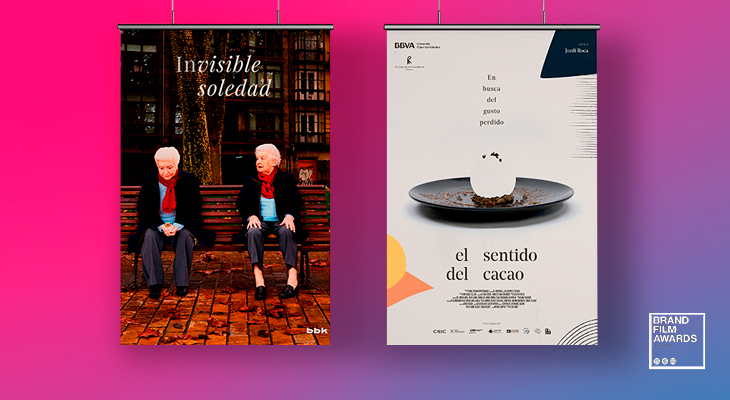 LLYC has won three awards at the prestigious Brand Film Awards EMEA 2020. The Consumer Engagement and Creative Studio teams at the firm, the only Spanish agency to be nominated this year, have been recognized in three categories: Most Emotional Film, Not-for-profit/Giving Back and Foreign Language.

The winning cases are “Invisible Solitude” for BBK in the categories of Most Emotional Film and Not-for-profit/Giving Back and “The Sense of Cocoa” for BBVA in the category of Foreign Language.

This reputable international event organized by two of the world’s most influential publications specializing in communication – PRWeek and Campaign US – selects the most creative and effective audiovisual pieces produced by brands each year, ranging from YouTube videos to large-scale documentaries. This year, the winners were announced via an event broadcast live from the awards’ website.

David González Natal, Partner and Consumer Engagement Director, believes that “risk and conflict are essential factors in giving stories a hook and emotional strength, and these projects reflect that perfectly. They are ideas in which the client’s courage and the teams’ internal drive for excellence in every detail were very important, because every good idea needs to be properly crafted to produce an outstanding brand film”.

Ana Folgueira, Partner and Executive Director of Creative Studio, says that “these awards recognize our commitment to creativity and the extremely high quality of our work, reaffirming the importance of audiovisual narrative to convey emotions and connect people with the purpose of brands“.

About the winning projects

Over two million elderly people over 65 live alone in Spain today. The “Invisible Solitude” campaign arose from the fact that this problem only comes to light when someone dies alone and weeks, months or even years go by before they are found. The campaign attempts to show that the worst thing about solitude is not the end but rather all the time leading up to the end.

Mercedes is one of those people living alone in Spain. She is an 89-year-old woman from Bilbao who inspired the campaign and features in it. To launch a social debate, it was decided to install a hyper-realistic sculpture entitled The Last Person who Died Alone by the Mexican sculptor, Rubén Orozco, on the Paseo del Arenal in Bilbao two days before the presentation. Following the debate generated on social media the days before, which attracted the media’s attention, Mercedes appeared during the media presentation to tell everyone in her own words and explain how, in actual fact, she is dead because for her, solitude is a “living death”.

THE SENSE OF COCOA

The goal for this project was to materialize the BBVA “Creating opportunities” purpose in a context of creativity, technology and drive to excel. We worked to create a pioneering experience called “The Sense of Taste”, for which we created a Brand Film called “The Sense of Cocoa” featuring the chef, Jordi Roca. The goal of this documentary was to put a face and give voice to taste disorders based on testimonials from sufferers themselves.

A limited-edition charity selection of sweets inspired by the stories and disorders suffered by these patients was also created, the profits from which were donated to the institutions involved so they can continue their research in this field.

Brand Film Awards EMEA is an international event that, every year, recognizes quality, creativity and innovation from brands in storytelling. The nominated audiovisual pieces range from three-second clips to feature-length documentaries. Every production made in the region during the last year took part in 2020.