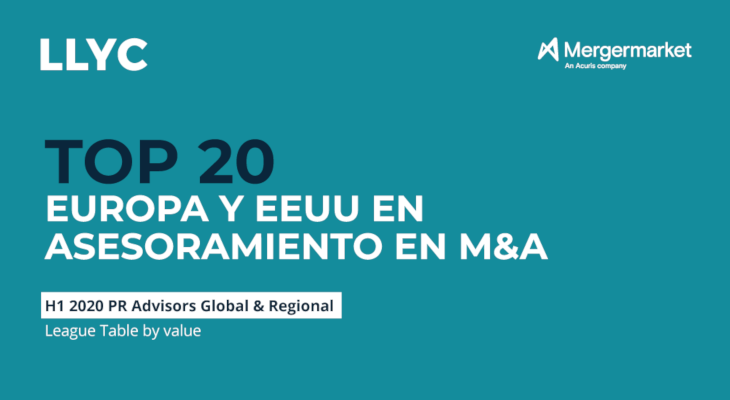 LLYC has reinforced its leading position as a communications consultancy for mergers and acquisitions (M&A), featuring among the Top 20 European firms for the first half of 2020. The latest Mergermarket ranking places LLYC 16th by value of the operations it advised, a significant jump compared to the same period in 2019 by the data analysis agency. Despite the reduction in the number of M&A transactions in this period due to COVID-19, the Spanish company has risen in the rankings and has positioned itself as a leading firm in multi-country operations by becoming a benchmark in markets such as the United Kingdom and France, in addition to its already solid position in Spain.

Also noteworthy is LLYC’s first entry into the U.S. market rankings, placing among the Top 20 communication consulting firms in M&A advisory. The Mergermarket platform places LLYC in 19th place, thanks mainly to its role in the sale of Permira’s majority stake in Duff&Phelps for $4.2 billion. This figure highlights the company’s international projection and its commitment to the American continent.

LLYC belongs to the international network of Finsbury Glover Hering, a global strategic communication and public affairs grouping, which places first in Mergermarket’s global ranking, as well as in Europe and the United States. This guarantees LLYC clients access to the main financial markets through the market leader in each of these regions.

The LLYC team has participated in the communication process for some of the most significant corporate transactions that have taken place in Spain during the first half of the year. Some important transactions are not reflected in the Mergermarket ranking, such as the financial restructuring process and subsequent capital increase carried out by Deoleo and the purchase of a majority stake in OHL by the Caabsa Group.