NewsNewsLLYC – prize-winner at FIAP and at Inspirational

LLYC – prize-winner at FIAP and at Inspirational 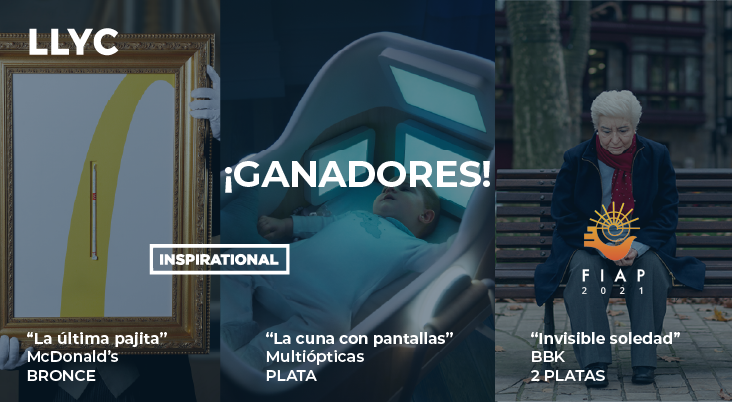 LLYC continues to carve out successes at the main national and international events. The firm has just won four more awards, two at the Ibero-American Advertising Festival (FIAP) and another two at Inspirational 2021, which held their award ceremonies on Thursday. Specifically, the campaign “Invisible Soledad” for the BBK Foundation won two silver awards at FIAP, in the categories of Innovation in PR and Innovation in Outdoor/Public Streets/Ambient. Meanwhile, at Inspirational, the campaign “La cuna con pantallas [Screen Pollution]” for Multiópticas won a silver award in the category of People Corporate Social Responsibility. “The last straw” for McDonald’s won a bronze award in the category of Planet Corporate Social Commitment. Following these new awards, LLYC has now received 109 recognitions in the year to date.

The Inspirational Awards recognize campaigns, projects and companies that the jury considers as the most inspirational in the communication and advertising sector in digital environments. In other words, whose contribution, in terms of creativity, innovation, effectiveness and notoriety serve as a benchmark for agencies, advertisers and the sector in general.

In turn, the Ibero-American Advertising Festival (FIAP) has been held for the last 50 years and seeks to boost creativity in all advertising formats in Ibero-America, taking into account excellence and innovation in the projects presented.

“Invisible Soledad” is to date the most successful LLYC project, and has won 54 awards. This campaign for the BBK Foundation, created by the Consumer Engagement team, seeks to show this foundation’s social contribution. The proposal seeks to draw attention to the loneliness suffered by many people over the age of 65. To start the debate, a hyper-realistic sculpture was installed in one of the most frequently used areas of Bilbao in memory of Mercedes, “the last person to die alone”. The project generated a great deal of media attention, even more so when the media presented Mercedes, the woman who inspired this action, which enhanced the visibility, in real life, of this problem.

The project “La cuna con pantallas [Screen Pollution]” for Multiópticas seeks to raise awareness and generate social debate on the responsible use of screens. To achieve this, a fake company was set up that sold a cradle, a high chair and a see-saw with screens incorporated. A series of actions with mother and father influencers created a huge wave of indignation. It was then revealed that the company did not exist and this negative chatter turned into media impacts, and enhanced the brand reputation and sale of products related to eye health and screens. This action, which has now won 8 awards, was developed by the Consumer Engagement teams and Creative Studio at LLYC.

“The last straw” is a project for McDonald’s created by the Consumer Engagement team in Madrid and developed with the support of the Public Affairs, Creative Studio and Corporate Communication departments at LLYC. Plastic straws, converted into a negative symbol of climate change, were going to disappear from the company’s establishments. To enhance its notoriety, and as part of its sustainability strategy, an historic, artistic and valuable symbol was created – the auctioning off of the last straw. The action went viral, with a final bid in excess of 50,000 euros, which went to a charitable cause. The campaign has already won 11 awards, including at Eficacia 2020 and the Stevie Awards 2021.