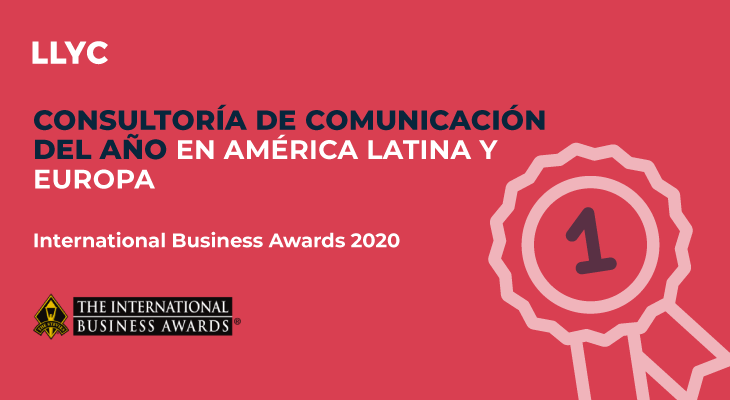 LLYC received the gold award in the categories of “Communication Consultancy Firm of the Year in Latin America” and “Communication Consultancy Firm of the Year in Europe” at the International Business Awards 2020. These awards are in recognition of the presence and leadership of LLYC in both regions. In addition, it received another 16 awards: 7 gold awards, 4 silver awards and 5 bronze awards. The results were announced today on the event’s official website and a virtual award ceremony will be held in the month of December.

LLYC received awards for the work performed for the customers BBK, Schindler, McDonald’s, Oracle, Impulse Group México and the David-19 project developed in collaboration with the Inter-American Development Bank. In addition, it received awards for the materials developed by the in-house team of IDEAS LLYC in the categories of Best House Organ – For General Audience and Best White Paper or Research Report.

For José Antonio Llorente, founding partner and Chairman of LLYC, “This is the sixth gold award we have been bestowed in the category of Communication Consultancy Firm of the Year in Latin America and the seventh as the best firm in Europe at the International Business Awards. For us, these recognitions are always an honor and a source of excitement as they represent the extraordinary work carried out by our teams”.

The International Business Awards are one of the most important business awards in the world. They were set up in 2002 to recognize the achievements and contributions from organizations and professionals from all around the world. This year, more than 3,800 projects were presented from firms in 63 countries.