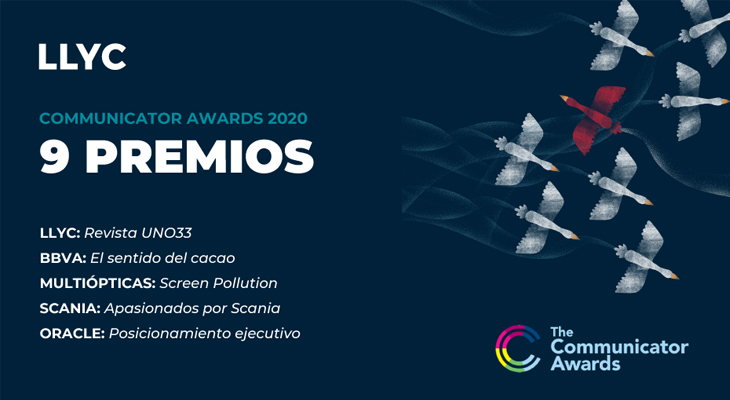 LLYC received nine prizes at the 2020 edition of the Communicator Awards, an event organized by the New York Academy of Interactive & Visual Arts to recognize outstanding ideas in the marketing and communication sector worldwide.

The following projects were given Awards of Excellence:

“Screen Pollution”, for Multiópticas, a project by the Consumer Engagement team, won two prizes in the categories of Commercials: public service and Integrated campaign: cause marketing.

“Scania Lovers”, developed by the LLYC team in Brazil, also won a prize in the category of Social: Community building and engagement.

Awards of Distinction, the second group of prizes handed out by the organization, were won by the magazine UNO#33: The impact of exponential technologies on communications in the category of Writing; “The Sense of Cocoa”, developed for BBVA by the Consumer Engagement and Creative Studio areas in the category of Branded entertainment: documentary; and “Oracle: executive positioning” by the LLYC team in Brazil in the category of Social: overall social presence.