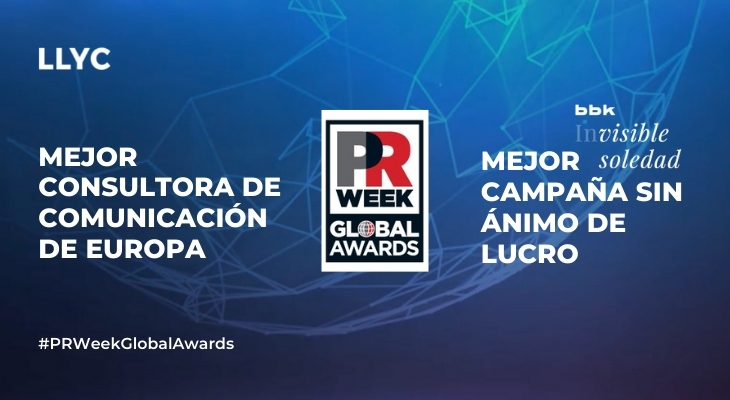 LLYC has been named as the best European consultancy firm – the first Spanish firm to receive this award – at the PRWeek Global Awards 2021, one of the most important international events in the sector that celebrated its online award ceremony last night. LLYC also received a special mention in the category of best Latin American communication consultancy firm.

The communication and public affairs consultancy firm was also recognized in the category of best non-profit campaign for its “Invisible Solitude” project developed by the company’s Consumer Engagement Area in Spain for the BBK Foundation.

“Invisible Solitude” is already one of the Spanish campaigns with the greatest overseas recognition in recent times. It has earned 38 awards at leading national and international events, including the International Andy Awards, Brand Film EMEA, Sabre Awards, El Ojo de Iberoamérica and the Clio Awards. The project seeks to raise awareness about one of the most pressing problems in modern society: loneliness in old age and its serious consequences.

José Antonio Llorente, Founding Partner and Chairman of LLYC, believes that these awards “boost the firm’s prestige, are a reflection of our evolution as a consultancy firm and our global presence but, above all, represent recognition of the work we do on a daily basis for our clients. They most definitely strengthen our resolve achieve our objectives”. Furthermore, “the entire LLYC team is extremely proud that Invisible Solitude has been recognized by the PR Week awards as the best project for a non-profit organization because it represents recognition of the fact that public relations continue to evolve, and that creativity is key to successfully having an impact. One member of the panel described the project as ‘beautifully simple’, which is not only a huge compliment for us but also something we aspire towards with all our projects”.

Based on the most rigorous of criteria, the PRWeek Global Awards annually highlight the leading players in the PR industry around the world, as well as the success stories taking place during the year. Its organizer, the PRWeek publication, is one of the leading media outlets specializing in communication anywhere in the world. The panel includes senior professionals from the sector, as well as leaders from companies, non-profit organizations and governments.