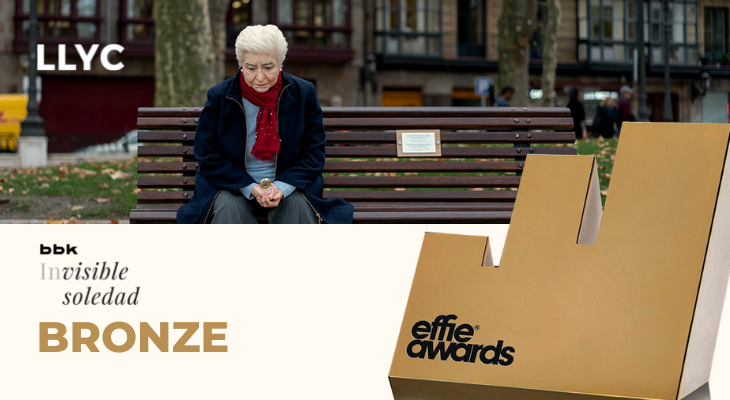 “Invisible Soledad” – the campaign created by the Consumer Engagement team at LLYC for the BBK Foundation, continues to win awards two years after its launch. It received this latest recognition at the Effie Awards Europe 2021, winning a bronze award in the “Positive Change Europe: Social Good – Non-Profit” category. This project has now won 55 awards at the most prestigious national and international events, including Cannes Lions, Eficacia, Gerety Awards and El Ojo de Iberoamérica.

“Invisible Soledad” is the firm’s most successful project to date, designed with the aim of drawing attention to the unwanted loneliness suffered by a large part of the population over the age of 65. To open up the debate, a hyperrealist sculpture was placed in one of the busiest areas of Bilbao, in memory of Mercedes – “the last person to die alone”. The initiative generated a great deal of noise in the social media, even more so when Mercedes was finally presented to the media – the woman who inspired this action, which helped enhance the visibility of the problem, through a case study.

“Creativity and effectiveness should be two sides of the same coin, so we are particularly pleased that after numerous international creative awards for Invisible Solitude, we now receive this recognition from the European Effie Awards, which joins the Gold in the Spanish Effie Awards that we received at the time to highlight the measurable impact of the project,” says David Gonzalez Natal, partner and global Engagement leader at LLYC.

“This project has been key for us and is an example of the risky creativity of the campaigns we commit to with an underlying purpose. We are grateful to BBK for trusting us with this initiative that has carved out so much success”, stresses Julio Alonso, Executive Creative Director at LLYC.

The Effie Awards Europe, organized by the New York American Marketing Association, have recognized the effectiveness of communication and marketing campaigns in Europe since 1996. Their philosophy is to recognize the role of these fields as business tools, to which end the jury takes into account the results of the participating campaigns. They also seek to highlight advertising efficacy between client and agency.