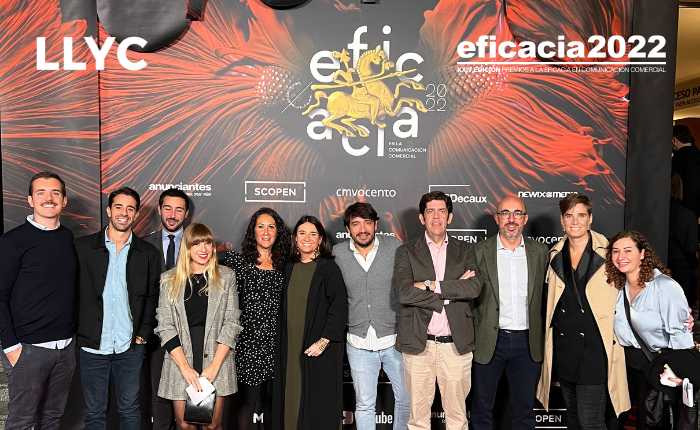 Ultimate effectiveness with Eficacia. LLYC was one of the big award winners during Thursday’s award ceremony. The firm’s Consumer Engagement team won all four awards for which it was shortlisted. The ‘Bihar, choose the future’ campaign for BBK received a gold in the top regional/local campaign category and a silver in the top branded content action category. Meanwhile, ‘You’re a gamer and you don’t know it’ for Multiópticas took home the gold for best campaign with a budget under €250,000 and a silver for most original and disruptive strategy. The gala was held at the Teatro Real in Madrid and was attended by several of the company’s agents. These included Luisa García, Partner and CEO Europe; Jorge López Zafra, Partner and Managing Director of the Madrid office; Patricia Cavada, Senior Engagement Director; Julio Alonso Caballero, Executive Creative Director; and Guillermo Lecumberri, Director of Consumer Engagement at LLYC.

The Eficacia Awards, organized by the Spanish Association of Advertisers with the strategic advice of SCOPEN, have been recognizing campaign results in terms of the contribution of commercial communication since 1997. They are considered the most important in the sector in Spain. A total of 229 entries from 115 advertisers and 126 agencies were submitted this year.

Patricia Cavada, Senior Director of Engagement at LLYC, comments: “We are very pleased to have won these four medals. The two campaigns for BBK and Multiópticas are garnering numerous awards. Winning the Eficacia Awards just shows how much our commitment to creativity focused on results”.

Julio Alonso Caballero, Executive Creative Director of LLYC: “These four awards are a source of pride for our entire team, which has won medals in this competition for four years running. The Eficacia awards reward results, and for this reason we are also especially happy about what it means for two of the customers who have bet on us the most, such as Multiópticas and BBK. Both Javier Sánchez Ciudad and Mireya Álvarez Basurko had that intuition that makes campaigns special”.

Throughout this 2022, the Madrid Consumer Engagement team has won 44 awards in major national and international competitions. While the list of awards is too long to include here, some of the most salient: Lions Cannes, Brand Film Awards EMEA, El Sol, FIAP and One Show.