NewsConsumer EngagementLLYC chalks up 120 awards in 2022

The year 2022 proved to be yet another successful one for LLYC. The consultancy firm has garnered a total of 120 awards and recognitions with campaigns carried out in Madrid, Barcelona, Mexico, Dominican Republic, Portugal, Panama, Peru, Argentina and Brazil, to name just a few. 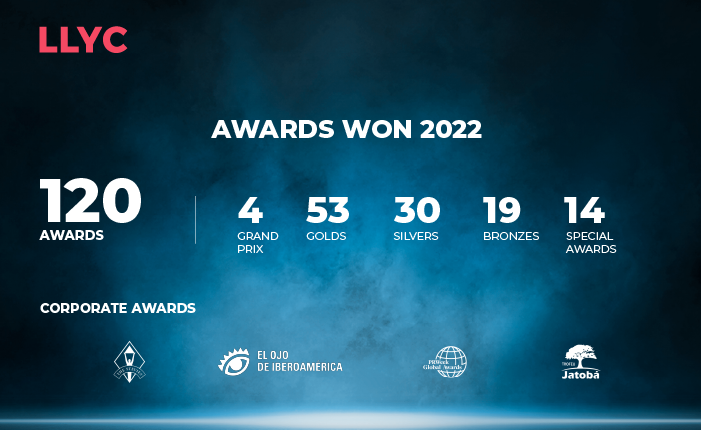 ‘Bihar, choose the future’, the campaign run for the BBK Foundation by the Consumer Engagement team in Madrid, has been the company’s flagship campaign in 2022, winning a total of 43 awards. These recognitions included a Silver Lion at Cannes, the Gran Ojo Vía Pública and four Eficacia awards.

The firm has also achieved great success with other projects such as “¿Dónde está mi fría?” (Where is my cold one?) in the Dominican Republic for the Cervecería Nacional Dominicana; “Ciencia es Esperanza” (Science is Hope) together with 3M; “Eres Gamer y No lo Sabes” (You’re a gamer and you don’t know it) by the Consumer Engagement team in Madrid for Multiópticas; “Ni Vencedoras, Ni Vencidas” (Neither Winners, Nor Losers), by Consumer Engagement Barcelona for Novartis; “Los Cabos te cuida” (Los Cabos cares about you) for the Los Cabos Tourism Trust in the operation of LLYC Mexico; and “Abuelos del alma, abuelos para siempre” (Soulful grandparents, eternal grandparents) by LLYC Portugal together with Dove.

With such a full trophy case, LLYC was recognised as Spain’s most awarded agency in 2022 in FIAP’s Ibero-American Grand Slam Ranking, the most outstanding PR company in Spain in TOP FICE 2022 and among the Top 10 best agencies in Ibero-America.

In addition to the achievements of LLYC’s creative teams, there are other corporate recognitions that reinforce the firm’s position as a leading consulting firm in the sector:

The crowning touch to an extraordinary year of recognition came from Fundación LLYC and all its volunteers, who for the first time in the company’s history won three awards for the “Transparentes” project, carried out together with Fundación 26 de Diciembre and REDI.