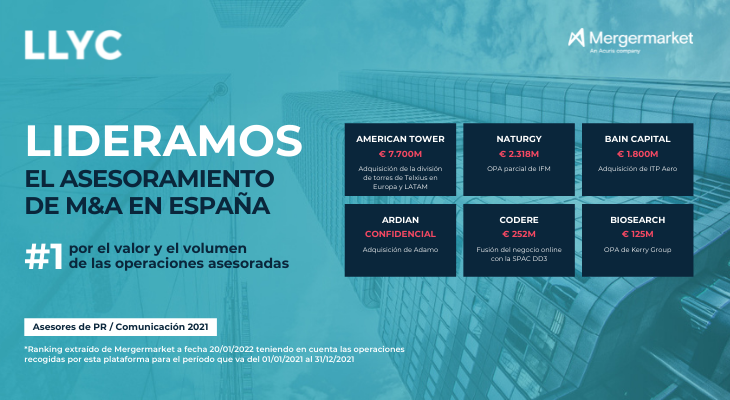 LLYC has closed off 2021 as the leading communication consultancy firm in Spain in mergers and acquisitions (M&A). It heads up both the number and the value of the deals advised on, according to data from the analysis agency Mergermarket. In total, 34 deals were advised, amounting to 14.69 billion euros. 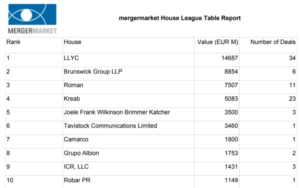 LLYC has also taken part in other major M&A deals which, although announced in 2020, took place last year, such as the merger between CaixaBank and Bankia.

Growth in listings on the stock exchange

Over the course of 2021, LLYC also consolidated its leading position in advice on listings on national and international stock markets. Among other deals, the firm, together with its partner FGH, accompanied Acciona in the launch on the stock market of its renewable energy subsidiary Acciona Energía – the largest stock market launch in Spain since 2015. It also advised the company of Spanish origin Allfunds in the notification of the initial public offering in its launch on Euronext Amsterdam and the firms AZ Capital and SJT Advisor in the launch of SPEAR – the leading listed SPAC in Europe – which has a Spanish sponsor.

The financial communication team also designed and implemented the communication strategy that accompanied the listing of LLYC on BME Growth, the first Spanish communication consultancy firm to be listed on the stock market.

“The economic recovery has reactivated a stronger market for corporate transactions than we would have initially expected. Furthermore, our role in these deals has been reinforced. Such elements as our ability to incorporate technology and creativity and our presence in the main financial markets through our alliance with FGH have allowed LLYC to bed down its leading position for the second consecutive half-year”, explains Luis Guerricagoitia, Senior Director of the Financial Communication Department at LLYC.

Leading position of our partner FGH

Finsbury Glover Hering (FGH) – the international communication consultancy firm that LLYC is partnered with in the development of multi-country projects, is also ranked in a top position on the ranking drawn up by Mergermarket, consolidating its position in the top 5 at a European and a global level in deals advised on.