NewsNewsLLYC, leader in Spain on Merger and Acquisition Consulting, according to Mergermarket

LLYC, leader in Spain on Merger and Acquisition Consulting, according to Mergermarket 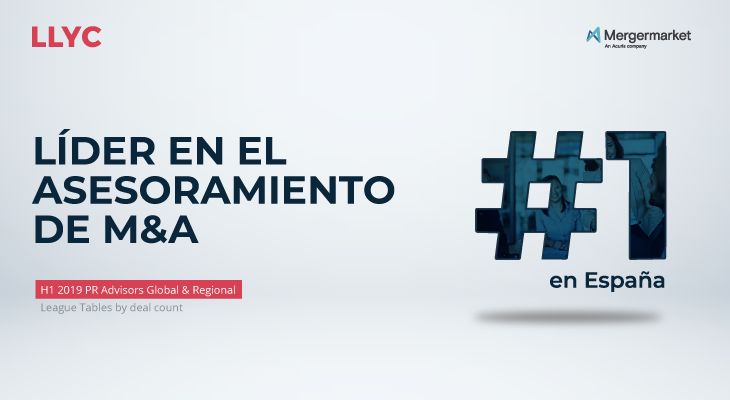 LLYC is positioned as the first communications agency in Spain as to Mergers and Acquisitions (M&A) because of the number of operations it has participated in during the first half of the year, according to the prestigious ranking of the data analysis agency, Mergermarket.

LLYC has provided communication advice on a total of 10 transactions at a value of 1.187 billion euros, now holding the first position climbing from the fourth it occupied back in June 2017. 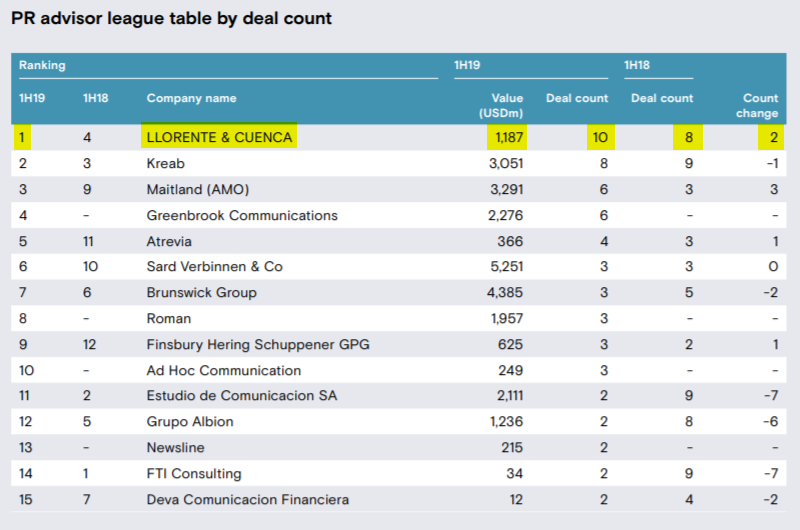 The Global Alliance led by Finsbury, Hering Schuppener and Glover Park Group (GPG), where LLYC belongs, also consolidates its leadership position, heading the European ranking due to the number of operations and holding the fourth position in the global rating. Likewise, the member agencies are among the first six positions in each of their markets: Germany (1#), France (1#), Nordic countries (#3), United States (#4) and United Kingdom (#6).

LLYC team, led by Jorge López Zafra, has participated in the communication process of some of the most relevant corporate operations that took place in Spain in the first half of the year. Among the transactions that drove the Company to lead the ranking in Spain are: OPA of World Confectionery Group by NATRA, Vitaldent sales process by JB Capital Markets, the acquisition of Ferroatlántica España under TSSP fund or Ardian divestiture process in CLH. At the same time, the financial communications team has participated in the capital increase of the British investor group, Zegona and its further positioning as Euskaltel main shareholder, by means of direct purchasing in the market.

José Antonio Llorente, LLYC Founding Partner and Chairman, stated: “This news confirms the reference position of our financial communication team as to consulting on corporate operations and shows the excellent work performed. This is a trend that we expect to maintain, strengthening our leadership position as the first communications consulting firm In Latin America, Spain and Portugal”.