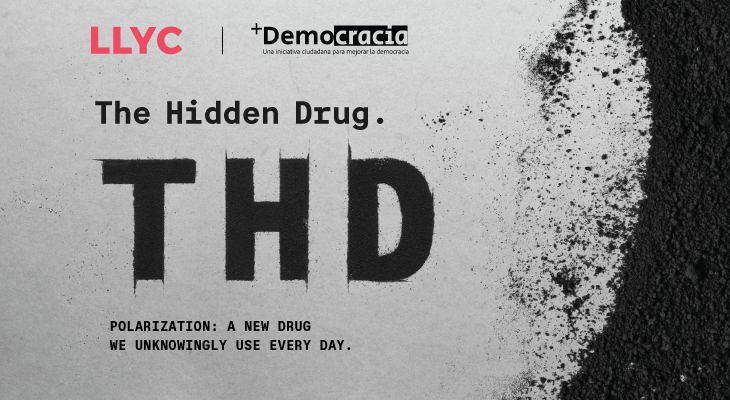 Polarization in Ibero-America has grown by nearly 40% over the last five years, and every year more and more people engage in polarizing conversations on social media. Since the arrival of the pandemic, the level of involvement or engagement in polarizing conversations is growing at levels of 8% per year in Ibero-America and as much as 15% in the USA.

Drawing on Big Data and Artificial Intelligence techniques, LLYC’s and Más Democracia report, titled ‘The Hidden Drug. A Study on the Addictive Power of Polarizing Public Debate’, analyzes conversations over the past five years in Ibero-America and the United States, processing over 600 million social media posts, gleaned between September 1, 2017, and August 31, 2022.

Conducted by LLYC, Más Democracia, alongside experts such as Mariano Sigman, neuroscientist, and author of “The Power of Words”; Patricia Fernández, a clinical psychologist at the Ramón y Cajal Hospital, and Belén Carrasco, senior researcher and deputy director of Eyes on Russia, Centre for Information Resilience; the campaign also includes a series of powerful pieces developed by LLYC’s creative teams and demonstrates that addiction to social networks reaches the rank of a drug in certain cases: a drug hidden behind the apparent normality of the use of these digital platforms.

This addiction to networks, and especially their polarizing content, generate, both in individuals and in society, symptoms similar to Class C drugs. Symptoms may include loss of control, mental absorption, or severe impairment of the person’s daily functioning.

José Antonio Llorente, Founding Partner and President of LLYC: “We are rolling out this global campaign in response to our concern about the normalization of this phenomenon. Our aim as a company is to build trust between people, institutions, companies, and brands, and polarization generates the opposite effect. This polarization hinders people from reaching a consensus and finding common ground. That is why we have the responsibility to create spaces for conciliation, peace, and relaxation in finding a way out of this situation.”

For neuroscientist Mariano Sigman, author of The Power of Words, “it is difficult to measure the exact risk of addiction; in some cases, it is well known but in others, such as polarization, it is not. The great human tragedies and massacres result from moments of incomprehension, from the exacerbation of this mechanism by which one group cannot understand the ideas of the other. This failure to understand drives one group to hate the other to such an extent that they decide that the only way to settle the matter is to kill everyone in a war. This may be the real risk of a drug-like polarization.”

The lower growth in the United States compared to other countries is due to the enormous consensus that racism and abortion generate in US society. The George Floyd case involved a high-volume, high-consensus social backlash that resulted in a temporary drop in the polarization of 74%; while the court rulings in recent months against abortion also generated a high-consensus backlash movement.

The report also warns of a progressive increase in this “addiction”; that is, the level of involvement or engagement of users on both sides of the political spectrum in the territories of conversation. Ibero-America grew by 11% the month the pandemic was declared and has continued to grow at an annual rate of 8% ever since.

In the USA, conversation addiction levels show a continuous growth of 15% per year, and, over the last few months, the growth slope is even accelerating by 13% above average.

You can download the full report, video, and images of the campaign here.