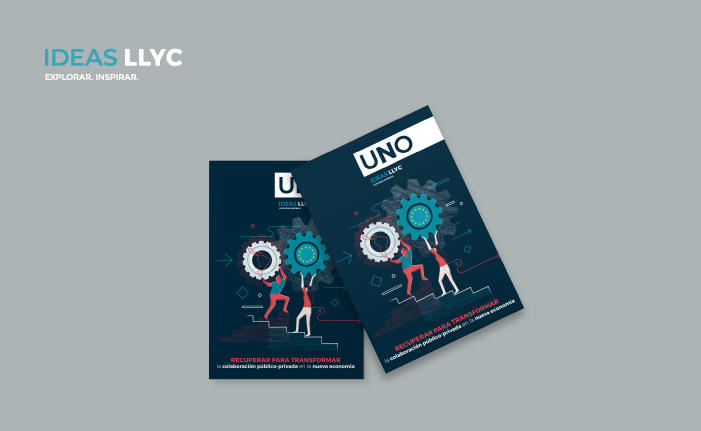 LLYC IDEAS – the Leadership Centre through knowledge of the consultancy firm – has just launched Recover to transform, issue number 38 of the magazine UNO. The publication, available from today in its digital edition, reflects on public-private collaboration and the role it plays in the economic recovery.

The magazine gathers nearly 20 articles penned by executives, economists and politicians that analyze the current economic situation, strongly influenced by the war but with new perspectives after two years of economic and health crisis. This issue also includes an interview with Antón Costas, Chair of the Economic and Social Council of Spain. In it, he argues that the Next Generation EU funds give “an extraordinarily strong boost to the transformation of the private economy and the Spanish public sector”, and specifies that it is necessary to “set out the course of this transformation well”.

A broad range of experts also contribute to this issue 38 of the magazine UNO: Rafael  Domenech, Head of Economic Analysis at BBVA Research and Professor of an Introduction to Economic Analysis at Valencia University; Ximo Puig, President of the Regional Government of Valencia; Susana del Río Villar, Member of the Committee of Independent Experts of the EU; Joaquín Mollinedo, Managing Director of Institutional Relations, Communication and Brand at Acciona; Adriana Domínguez, Executive Chair at Adolfo Domínguez; Paz Guzmán Caso de los Cobos, Economic Counsellor at the Representation of the European Commission in Spain and member of the Recovery and Resilience Task Force; José Ignacio López, Executive Managing Director and Head of Economic Research at Corficolombiana; Matías Kulfas, Minister for Productive Development of the Nation; Daniel Schteingat, Director of the Study Center for Production (CEP XXI), and Andrea Villareal, Director of the Economic Department at the Association of Private Banks of Ecuador.

The articles penned by LLYC in this issue are by Joan Navarro, Partner and Vice-President for Public Relations; Paloma Baena, Senior Director of the Next Generation EU unit; Nuno Magalhães, Director of Political Context at LLYC Portugal, and Jordi Sevilla, Senior Advisor, Member of the Advisory Council and Director of the Economic Context department.

José Antonio Llorente, Founding Partner and Chairman of LLYC, describes this new edition of UNO in the following way, “We have sought to reflect the need to boldly address a new era of cooperation between the public and private sectors with imagination, in which we align the ambitions of the key sectors of the productive and social fabric with the economic ‘missions’ proposed by public institutions. This is a huge challenge, added to by the tragic presence of a war, which we have tried to address with realism but also with a hint of hope”.

Once again, the visual artist Marisa Maestre is the creator of the illustrations of the pages of the magazine UNO, with a personal aesthetic that is now characteristic of this publication.

The complete magazine can be downloaded here.