NewsBarcelonaLLYC has consulted on 30 transactions worth EUR 48,973 million in the first half of 2022, according to Mergermarket

LLYC has consulted on 30 transactions worth EUR 48,973 million in the first half of 2022, according to Mergermarket 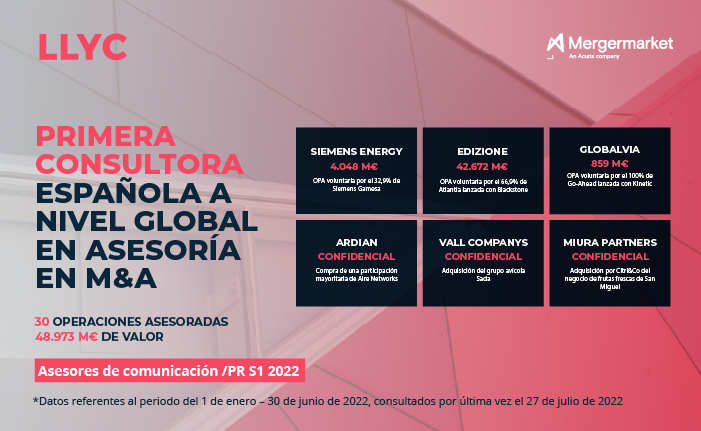 LLYC closes the first half of 2022 as the leading Spanish consulting firm in global mergers and acquisitions (M&A) communications with a total of 30 transactions worth EUR 48,973 million, according to data compiled by Mergermarket. In Spain, it provided consultancy services for 25 transactions with a total value of EUR 5,442 million, consolidating its leadership in the domestic market for the third six-month period in a row.

Together with FGS Global and its associated firms, LLYC has participated in some of the most important transactions in Europe. These include Siemens Energy’s takeover bid for Siemens Gamesa and Edizione and Blackstone’s takeover bid for Atlantia.

In addition to the above transactions, LLYC’s financial communications team has been involved in the communication process of other major transactions such as the takeover bid by Globalvia and Kinetic for the British group Go-Ahead and the acquisition of a majority stake in the telecommunications operator Aire Networks by Ardian.

An intense activity in which it is also important to highlight the relevant role played by LLYC’s Barcelona office which has also worked on the acquisition of San Miguel’s fresh fruit business by Citri&Co, a group owned by Miura Partners, and the purchase by Vall Companys of the Sada poultry group.

“Strong activity in sectors such as renewable energy and technology, accompanied by intense private equity activity, has maintained the M&A activity during the first half of the year. A backdrop against which LLYC has managed to maintain its leadership thanks to its solid track record, its extensive international network and its ability to incorporate increasingly valued elements such as technology and creativity”, explains Luis Guerricagoitia, Senior Director of Financial Communications at LLYC.