NewsNewsLLYC, in Global Top 15 in communication of mergers and acquisitions

LLYC, in Global Top 15 in communication of mergers and acquisitions 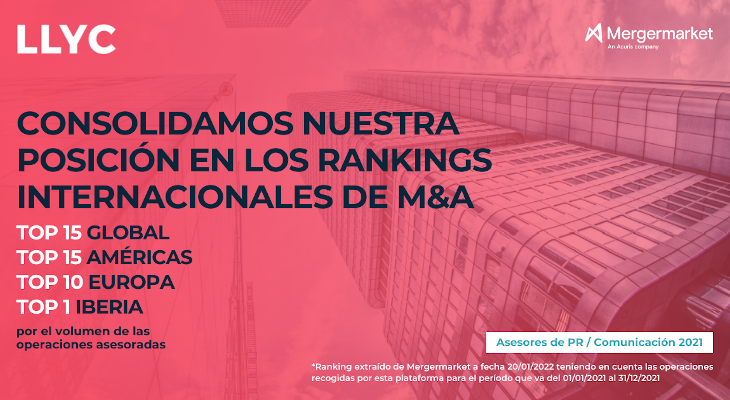 In 2021, LLYC joined the Global Top 15 communication consultancy firms in mergers and acquisitions (M&A), drawn up using the data available to the analysis agency Mergermarket. It participated in a total of 44 deals amounting to 16.57 billion euros. 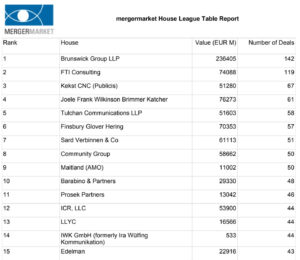 In addition to its global positioning, LLYC also consolidated its position in 2021 as a communication advisory firm for M&A deals in each of the firm’s key regions. Accordingly, in America, the firm appears in the Top 15 of the league table, ranked in 12th position by the number of deals (16) and in 15th position by their value (€10.41 m). 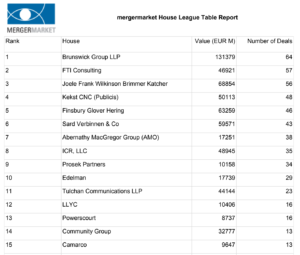 In Iberia, LLYC heads up the league table in the number of deals it advised on (36), of which 31 correspond to Spain, three are cross-border deals between Spain and Portugal and one took place in Portugal. Furthermore, the firm closed the year ranked in 1st position in Spain in both the value of the deals it participated in (€14.69 m) and in the number of deals.

Over the course of 2021, LLYC also consolidated its leading position in advice on listings on national and international stock markets. Among other deals, the firm, together with its partner FGH, accompanied Acciona in the launch on the stock market of its renewable energy subsidiary Acciona Energía – the largest stock market launch in Spain since 2015. It also advised on the launch of the SPAC AST & Sciende on the Nasdaq, and of the Spanish company Allfunds and of the SPAC SPEAR on the Amsterdam stock exchange.

The financial communication team also designed and implemented the communication strategy that accompanied the listing of LLYC on BME Growth in Spain – the first Spanish communication consultancy firm to be listed on this market.

Leading position of our partner FGH

Finsbury Glover Hering (FGH) – the international communication consultancy firm that LLYC is partnered with in the development of multi-country projects, is also ranked in a top position in the league table drawn up by Mergermarket, consolidating its position in the Top 5 at a European, American and global level in the value of deals advised on.