NewsNewsLLYC, communication consultancy firm of the year in Latin America and creative department of the year

LLYC, communication consultancy firm of the year in Latin America and creative department of the year 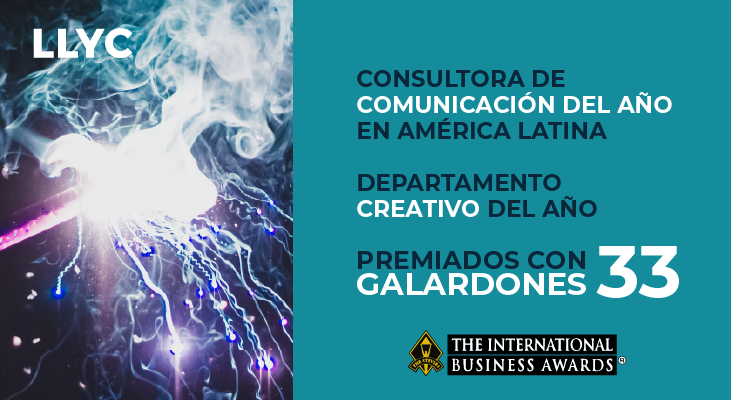 LLYC has once again triumphed at the International Business Awards 2021. The firm has once more won the Gold Award for the “Communication Consultancy Firm of the Year in Latin America“. It also won the Silver Award for the “Communication Consultancy Firm of the Year in Europe“. These awards recognize the presence and leadership of the company in the two regions. At this year’s edition, it also managed to win the best “Creative Department of the Year” award at a global level for the joint project carried out by the Engagement and Creative Studio departments. The “Future Leaders” global corporate project also won the Gold Award in the PR Innovation of the Year and Communication Research categories, whereby the jury rewards the firm’s commitment to technology and artificial intelligence.

In total, LLYC won 33 awards –14 Gold Awards, 13 Silver Awards and 6 Bronze Awards-, which makes it the most successful Spanish consultancy firm at this year’s awards. It is also the firm that has won the highest number of Stevie Gold Awards at this year’s edition and the second highest number of awards in total. The results were announced yesterday on the event’s official website. The virtual award ceremony will take place in December.

For José Antonio Llorente, Founding Partner and Chairman of LLYC, “this is proving to be an extraordinary year for the firm. These new awards are recognition of the efforts and hard work of the more than 600 professionals that make up this company, and spur us on to continue working in the same direction. This seventh Gold Award as the best communication consultancy firm in Latin America, in addition to the other seven Gold Awards we picked up as the best communication consultancy firm in Europe, is a form of recognition within the grasp of few others. And to be awarded the most Creative Department of the Year is precisely recognition of the trajectory and commitment of LLYC to creativity in all its departments”.

The International Business Awards are the most important business awards in the world. They were created in 2002 as one of the eight events organized by the Stevie Awards to recognize the achievements and contributions of organizations and professionals from all over the world. This year, more than 3,700 projects were presented from 63 countries.

In the year to date, the firm has already amassed 95 prizes and recognitions at the main national and international events (Cannes Lions, Brand Film Awards EMEA, CLIO Awards and El Sol). It has been chosen as the “Best Communication Consultancy Firm in Europe” at the PRWeek Global Awards 2021 and the “Best Communication Consultancy Firm in Southern Europe” at the EMEA SABRE Awards 2021.