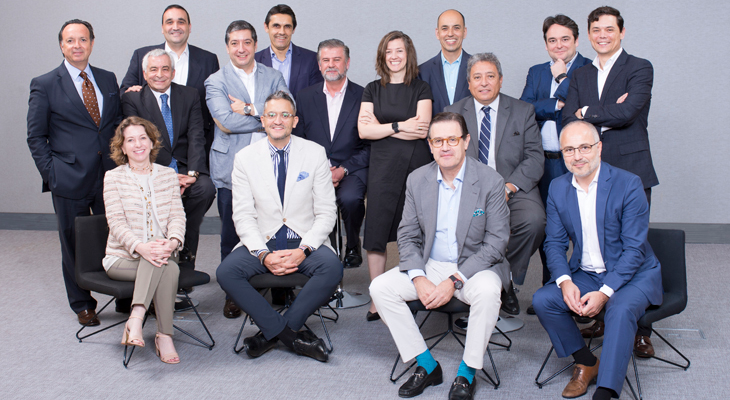 LLORENTE & CUENCA, the leading public relations, communications and reputation management consulting firm in Latin America, Spain and Portugal, closed 2018 with revenues from global fees of 38.4 million euros. This equates to net growth of 6% on the previous year. Growth stood at 10.7% when excluding exchange rate depreciation, especially in Argentina and Brazil.

With its own offices in nine Latin American countries, as well as in Miami and Latam Desks in New York and Washington (USA), operations by LLORENTE & CUENCA in this region currently account for 60% of total revenue for the company. In 2018, business volume in Latin America grew by 11%. Nonetheless, the currency depreciation effect in this region against the Euro in 2018 led to net revenue growth of 1%. Meanwhile, the offices in Spain and Portugal (Barcelona, Lisbon and Madrid) posted organic growth of 10% (14% including acquisitions).

José Antonio Llorente, Founding Partner and Chairman of LLORENTE & CUENCA, said “this was a year in which we achieved major goals from our Strategic Plan that will allow us to move forward with a clear focus on our clients. I’m talking about the consolidation of our region-based structure in Latin America, the increased strength of our executive structure and the acquisition of Arenalia in Barcelona. To this can be added some outstanding work by our almost 600 professionals, who have grown the business of our clients and LLORENTE & CUENCA to position the firm among the best in the world and the leader in Spain. This growth allows us to continue betting on Talent, promoting new partners and increasing the number of our staff”.

Acquisition of Arenalia and stronger leadership in Barcelona

In June 2018, LLORENTE & CUENCA acquired 100% of the shares in the corporate and product communication consultancy firm, Arenalia, based in Barcelona.

LLORENTE & CUENCA in Barcelona heads up a highly-competitive business that has been strengthened by the acquisition of Arenalia, which includes a team of over 50 professionals in the fields of consumer affairs, digital brand and lifestyle, with experience in the automotive industry, energy, tourism and wholesale sectors.

In January 2019, LLORENTE & CUENCA made a number of changes to its executive structure in order to strengthen the commitment it has to a client-focused approach.
The organizational changes mainly stem from two strategic lines of action; a client-focused approach and a region-based structure. As a result, senior professionals return to the front line and resume their management of clients and business development. Meanwhile, Latin America is organized into three regions (North Region, Andes Region and South Region), each one with its own general management, financial and talent structure accompanying and enhancing the local teams.

LLORENTE & CUENCA continues to top the ranking produced by the data analysis agency Mergermarket in Spain, becoming the leading communication agency in Spain for mergers and acquisitions (M&A) based on the value of its deals in 2018. When compared with 2017, the firm has climbed from fifth to first place. At a European level, LLORENTE & CUENCA occupies tenth position in terms of the operations for which it provided consultancy services, and 14th worldwide. In both cases, it is the first Spanish consultancy firm to appear on the list.

Talent remains one of the cornerstones for the development and growth of LLORENTE & CUENCA. Evidence of this is the 10.4% workforce growth, in line with the organic growth (of 10.7%) by the company.

Of the 182 new hires in 2018, 25 were for executive positions and 13 of those were taken up by women. 60 professionals were also promoted in 2018, 12 of them within the executive department and more than half of these were women. Women play a fundamental role at the firm, accounting for 68% of the workforce and almost 40% of executives (38%).

The commitment to talent is reflected in the continued expansion of the training offer from the Corporate University, which has provided a total of 930 hours of training to professionals in all categories over the course of the year. 2018 saw the start of the first cycle of the course for strong potential professionals at the company, with 12 graduates from this course in partnership with the ESIC Business School. Furthermore, LLORENTE & CUENCA joined PROMOCIONA – an initiative by the Spanish Confederation of Business Organizations(Spanish acronym: CEOE), the Women’s Institute (Instituto de la Mujer) and the ESADE Business School to foster the learning of executive skills by professional women. Finally, the number of people taking part in the Young Talent Program rose to 98 worldwide in 2018. This program was launched in 2017 and is aimed at all those young people who joined the firm recently.

For the fifth straight year, LLORENTE & CUENCA has been included in the exclusive “Best Companies to Work for in Spain” ranking by Actualidad Económica. It stands in 49th position and is the only communication consultancy firm to be found on the list.

The commitment by LLORENTE & CUENCA to creativity and the most innovative solutions led to 74 awards at international and regional events.

The creative nature of the work by the Consumer Engagement Department was recognized with two golds and one bronze at the 2018 Effectiveness Awards for the “Conde Mor” and “Amodio” projects for its client, Campofrío; and the 2018 Brand Film Festival London awarded five golds to the projects by the Consumer Engagement and Impossible Tellers Department for the brand films entitled “La máquina de tiempo” for Electium of Grupo Mémora, “Nueva Bureba” for Campofrío and “¡A escena!” for Obra Social “la Caixa”.

For the third straight year, LLORENTE & CUENCA led the ranking by El Publicista of consultancy firms and communication agencies most highly-valued by Spanish advertisers. 7 out of 10 considered LL&C as the best option when tackling a communication, reputation or public affairs challenge.