NewsNewsInvisible Soledad, second placed campaign of the year in the world

Invisible Soledad, second placed campaign of the year in the world 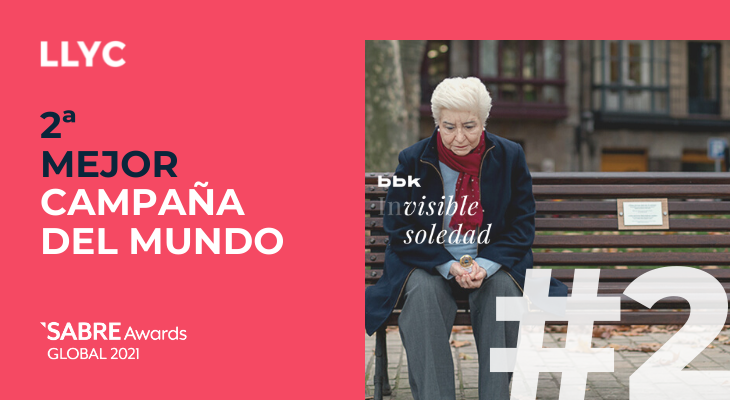 “Invisible Soledad” has been chosen as the second placed campaign of the year in the world at the Global SABRE Awards 2021, presented by the prestigious publication PRovoke. The ranking of the main projects in the world were revealed at the virtual ceremony held last night, selected from among more than 5,500 initiatives from 60 countries.

This campaign to raise awareness, produced for the BBK Foundation on the unwanted loneliness suffered by the elderly, created and developed by the Consumer Engagement department at LLYC, is the firm’s most successful project to date. It has now won 55 awards and recognitions, including three Lions awards at Cannes. The Global SABRE Awards distinguish the best practices in such categories as the social media, social responsibility, public affairs and internal communication.

David González Natal, Partner and Senior Engagement Director at LLYC, stresses that “this campaign has been a great source of joy to us, but above all it has allowed us to successfully break communication barriers, forging dialogue on a real problem that many elderly people suffer from through an adventurous creative project”.

The Global SABRE Awards recognize projects that have already been award-winners in local competitions (the Americas, LatAm, EMEA and Asia-Pacific). Back in June, “Invisible Soledad” was an award-winner at the EMEA SABRE Awards in the Iberia category.