NewsNewsForbes Latam and LLYC back a report on multi-Latin companies

Forbes Latam and LLYC back a report on multi-Latin companies 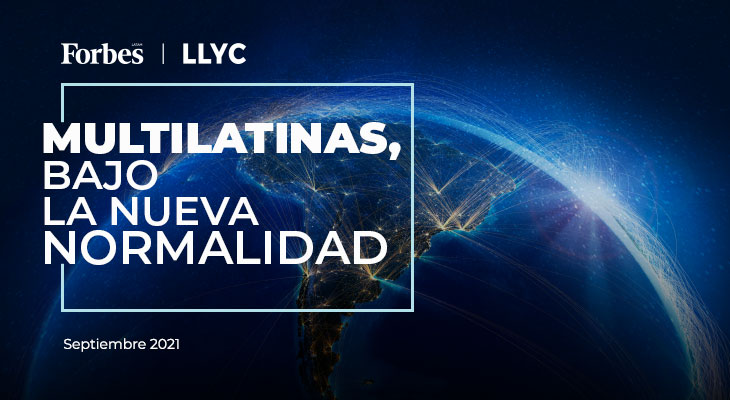 LLYC has firmed up an alliance with Forbes Latam to analyze the new context of a market that both are very familiar with – Latin America and the Caribbean. The drafting of a first joint report is the result of this agreement, entitled “Multi-Latin companies in the new normal“. With the help of artificial intelligence and through the analysis of big data, an analytical and journalistic approximation has been made so as to take a snapshot of the business ecosystem and contribute to decision-making in businesses.

For Alejandro Romero, Partner and CEO of the Americas at LLYC, this strategic analysis will be a beacon that guides many initiatives. “This analysis allows us firstly to scale and understand the impact of the Multi-Latin brand in the Americas, and to determine its capacity for adaptation and its commitments, to assess how this impacts and changes its industries and how its CEOs make the difference in the market”.

This first instalment, which was based on the analysis of 7.3 million messages from more than 2 million profiles in the first half of this year, underlines that the countries in the region did not have solid bailout plans like the United States or Europe following the crisis stemming from the pandemic. Only Brazil figures among the countries that invested a large part of its GDP in combating its effects. Multi-Latin companies thus faced their own specific challenges as a highly vulnerable region with less capacity for response.

The study shows that the chatter about Multi-Latin companies is focused, above all, on Brazil, Mexico and Chile and 63% of messages revolve around 10 companies in the following order: Petrobras, Nubank, Grupo Televisa, Grupo Bimbo, Natura, Bancolombia, Falabella, Cinépolis, Sigdo Koppers and Ambev. The most renowned Multi-Latin companies in terms of volume of chatter belong to the ‘Energy’ and ‘Food and drinks’ sectors, and account for almost half the messages (48.4%), which highlights the room for opportunity in other industries to foster chatter.

These are the man challenges and opportunities detected for Multi-Latin companies in the “new normal”:

– Companies are tending to become more flexible, and by their very nature, Multi-Latin companies have developed a certain resistance to crises due to the vitality of the region.

– The use of big data is less widespread in Latin America and, in a more volatile and uncertain context than the average, it is thus more important to implement prediction models because they offer a more competitive edge.

– A corporate concentration has taken place regarding this dialogue: 60% talk about the 10 leading companies that have had the greatest impact on public opinion.

– The new trends call for sounder infrastructure, but the Multi-Latin companies have a significant gap vis-à-vis their North American and European counterparts in terms of implementing many of these strategies.

– The success of companies that stepped up their commitment during the pandemic shows that there is significant growth potential for the Multi-Latin companies in the region.

– The Multi-Latin brand is a concept with little narrative use but with great potential in the region. Regional use fits into brand identity strategies.

👉 “Multi-Latin companies in the new normal“