CEO Activism as a Lever for Sustainability 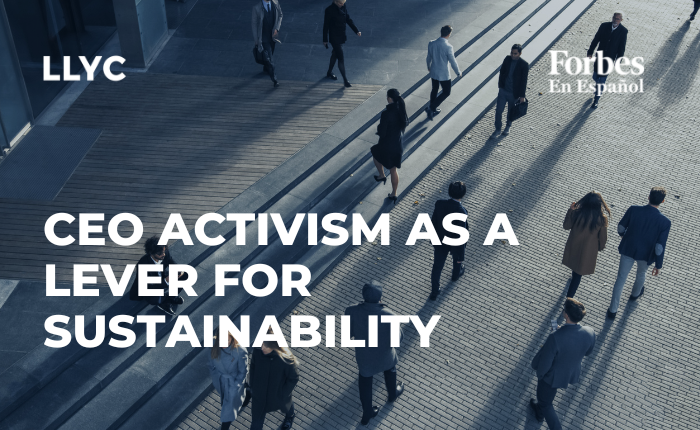 The development of society has made many people more aware of various situations and events that affect the population in general, as well as the role that companies play in the social environment. Today, people see companies as social actors that must take a position in favor of citizens. This is why many business leaders started to get involved in activities that increase the well-being of people, and that meet the social, economic and environmental expectations of the community. This is how the CEO Activism as a Lever for Sustainability, report was conceived, which is a collaboration between LLYC and Forbes. The organizations provide clear information demonstrating the positive impact of CEO activism for both their companies and society at large.

The report has been prepared through analyzing the profiles of 14 CEOs from diverse business sectors in 6 Latin American countries in different market sectors. These countries were: Peru, Mexico, Argentina, Chile, Brazil and Colombia.

Among the main conclusions, the study concludes that the role of the CEO Activist has to take into account three important points in order to act appropriately:

– The first is to listen and interpret the relevant conversations of citizens in order to understand their needs and, in this way, implement activism that responds to these demands.

– Second, there is the ability to involve the members of their organizations in the same social cause they are fighting for, which will also be a way to generate greater reach with the CEO’s social message.

– Thirdly, there is the creation of spaces for participation with the population that allow the CEO’s social cause to be known by the people. Public opinion needs to know about the CEO’s vision and activities in real time, in order to generate better expectations for the company and reinforce the legitimacy of its actions.

The impact on society

The activities that every CEO Activist undertakes will always have a positive result if carried out properly, and their impact can be decisive for the development of their community. Such is the case of Luiza Helena Trajano, who, thanks to her activism in favor of gender equality, against racism, and in favor of political and social welfare, has become one of the most important CEOs in Latin America.

The CEO’s activism must also be consistent with what they do with their clients and the decisions they make regarding the development of their own projects. Such is the case of Carlos Hank González, president of Banco Financiero Banorte de México, who is not only in charge of spreading his activism in favor of sustainable development and “green economy”, but also of making sure that his clients implement mechanisms or processes that are consistent with this vision he has as a company.

The challenges of CEO Activism

The study also reflects the challenges that CEOs must face in order to carry out efficient and value-generating activism at both the business and societal levels. Being able to strategize is of vital importance for their communication as there will be scenarios where directions may change suddenly due to unforeseen problems. In this way, being able to anticipate such problems will mean that the negative impact may be less and that, in addition, the CEO’s activism can be more impeccable in favor of society and their company as such.