NewsBESOBESO by LLYC recognized in “Best of the Best” by Merca 2.0 magazine

BESO by LLYC recognized in “Best of the Best” by Merca 2.0 magazine 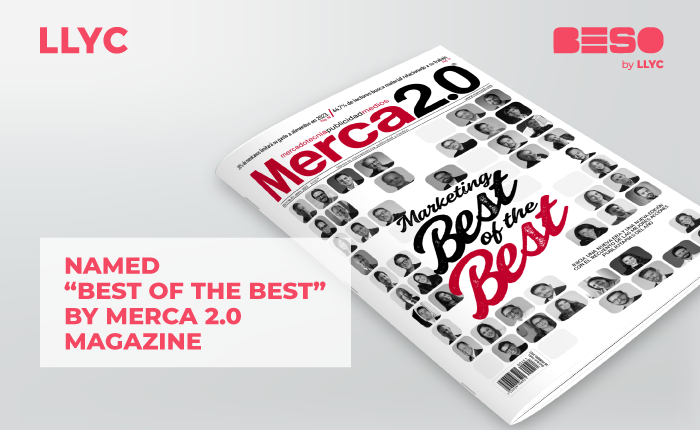 The marketing, advertising, media and digital marketing magazine, Merca 2.0, distinguishes BESO by LLYC as “Best of the Best”, in its edition that recognizes the best companies for the achievements and recognitions they obtained during the year.

Already in April 2022, Merca 2.0 had placed BESO by LLYC in the top three of the Digital Marketing ranking, climbing two places from its spot in the previous edition.

That same year, BESO by LLYC was awarded a bronze Effie for the “Mesa de Regalos” (Table of Presents) campaign for Liverpool and a distinction in the Ojo de Iberoamérica for the “Sopa de señas” (Sign Language Soup) campaign for La Moderna. In terms of Talent, it was positioned as “the best company to work for in Mexico”, awarded by Great Place To Work, for the fourth consecutive year. It also received the “Best Places to Work #LGTB+” certification from the Human Rights Campaign Foundation.

In addition to foreign recognitions, 2022 was a year of consolidation for BESO by LLYC following its integration into LLYC’s Deep Digital Business area. Over recent months, the firm has laid the foundations for regionalizing its services, accessing operations in almost 10 markets covering Latin America and the United States.