NewsUnited StatesBattle of the Narratives: The pro- vs. anti-vaccine digital conversation in the U.S.

Battle of the Narratives: The pro- vs. anti-vaccine digital conversation in the U.S. 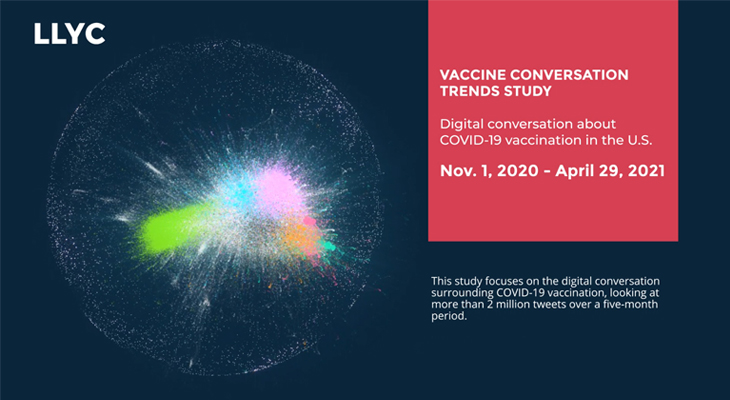 LLYC announced today the results of its independent Vaccine Conversation Trends Study, which examined over 2 million posts published in the United States between November 2020 and April 2021.

“As the vaccination program accelerates across the country, so does the misinformation surrounding it,” shared Francisco Marquez, LLYC’s DC Office Director and the study’s leader. “At LLYC, we understand the importance of data-driven decision-making within the public and private sectors. We wanted to understand the threat of COVID-19 misinformation, which is what led us to undertake this study. Our findings can help policymakers on the regional and federal levels, as well as interested private parties, create strategies to address the vast amount of vaccine misinformation in our country.”

The study revealed numerous insights, including the main misconception being spread about existing COVID-19 vaccines (the myth that it alters recipients’ DNA); the two main macro-communities involved in the conversation (Pro-vaccination and Anti-vaccination), as well as their multiple subcommunities; and the fact that mass media, vaccine laboratories, pharmaceutical companies, and authorities do not play any kind of leading role in this conversation. Importantly, it found that 33 percent of the Twitter conversation is led by just 40,000 profiles that reach hundreds of millions of platform users, reflecting the importance of focusing education efforts on these “power profiles.”

Study insights show that individual scientists and journalists lead the pro-vaccine community online. This group tends to support the federal government’s official statements and show primary concern for the Anti-vaccination community’s campaigns. The Anti-vaccine community is led by journalists and lawyers, with women and their concerns regarding the vaccine’s side effects during pregnancy being a second big driver of the conversation in this subcommunity.

Importantly, LLYC also found a geographic trend in the data. The states with the highest participation in this conversation are California (15.8 percent), New York (10 percent), Texas (8.6 percent), and Florida (6.5 percent). Interestingly, the conversation participants from New York have the highest reach at 346.2 million, more than 100 million more than California’s 236.6 million. These four states account for 43 percent of the Anti-vaccination conversation, revealing an opportunity to focus vaccination education on these areas.

The study also explores the U.S. Hispanic community’s presence in these conversations, as well as the leaders shaping them. One of the key findings is that while most U.S. Hispanics in November 2020 expressed doubt and fear regarding the vaccine, much of the community had become pro-vaccine by April 2021. Those who retained their anti-vaccine stance, however, increased their number of publications.

The study was conducted using Big Data, Artificial Intelligence, and other data analytics technologies to analyze the relationships between the people and organizations participating in this digital conversation on news sites, Twitter, Tumblr, forums, and blogs.