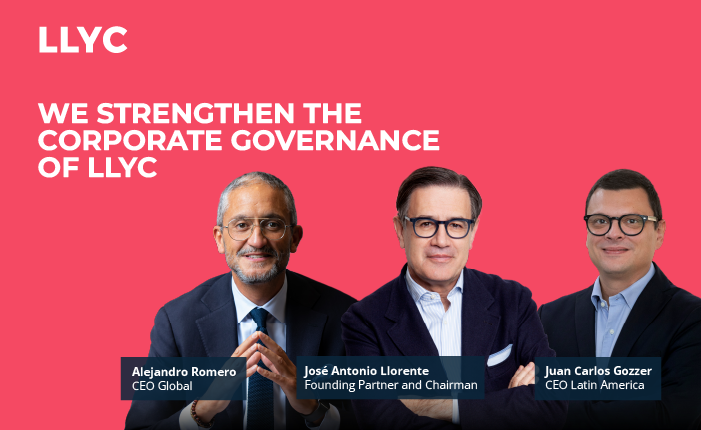 The board of directors of LLYC SA has appointed Alejandro Romero as the new Global CEO of the firm. Alejandro, who until now headed the Americas region, is a Partner and the second largest shareholder of the consultancy firm in which he has been working for 26 years. Juan Carlos Gozzer will head the organization in Latin America. José Antonio Llorente remains as Executive Chairman of the firm.

These changes seek to strengthen the management structure of the company, which is immersed in an ambitious growth plan. They are also intended to continue to promote the careers of some of its most valuable employees and align corporate governance with the standards of the most modern listed companies.

In the words of José Antonio Llorente, Founding Partner and President of LLYC: “The appointments of Alejandro and Juan Carlos are recognition of the enormous talent we have at LLYC. I am convinced that their extensive experience and in-depth knowledge of our company and the sector are a guarantee of success. The creation of the position of CEO, which is separate from that of Executive Chairman, also represents considerable progress in our corporate governance. We had planned to implement it at the end of 2023, but my personal circumstances make it advisable that we bring this measure forward and strengthen the company’s management.”

According to Alejandro Romero: “With the strengthening of our management, we want to accelerate our growth plan by focusing, above all, on growing in the United States, organically and inorganically, and continuing to drive our digital influence business and deep learning. LLYC’s raison d’être is our clients and we will continue to make a decisive contribution to the success of their business in the area of reputation and influence management. I am very excited about this new professional challenge to continue working closely with José Antonio Llorente.”

Alejandro Romero holds a degree in Information Sciences from the Complutense University and a Master’s Degree in Communication of Public and Political Institutions, also from the Complutense University. He began his career at LLYC as an intern in the Madrid office in 1996 and has been based in Latin America since 1998, where he has led the firm’s international expansion, implementing the start-up of all operations in the region. In 25 years in the Americas, Alejandro has contributed to developing a business worth more than 30 million euros working in the field of reputation, influence management and in the most representative crisis cases in Latin America: M&A operations such as the acquisition of SAB Miller by AB INBEV and the acquisition of Grupo Financiero Uno by Citibank. He has also driven the growth of LLYC’s digital area by transforming the consulting firm’s offering towards communication strategies based on Big Data and trend spotting.

The new CEO of LLYC LatAm, Juan Carlos Gozzer, is a Partner of the firm and, until this announcement, was LLYC’s Chief Operating Officer in Latin America. He is a specialist in reputation management and communication strategies. Throughout his 15 years with the company, he has coordinated various strategic positioning projects in Latin America and led the development of LLYC’s operations in Brazil and in the Southern Region, which includes Argentina and Chile. With an academic background acquired in Latin America and Europe, Juan Carlos has a degree in Political Science. In addition, he has a specialization in International Information from the Complutense University of Madrid and a Master’s degree in International Relations from the University of Bologna.