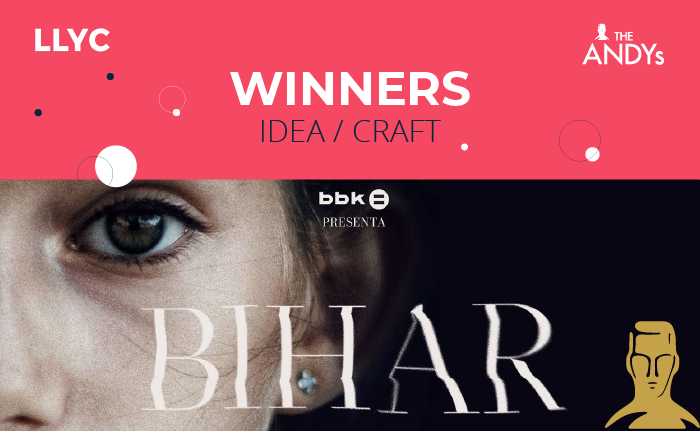 LLYC’s creativity has been recognized at the ANDY Awards – one of the most important sector events held in the USA. The firm has won two Gold awards for the project ‘Bihar, choose your future’ for BBK in the Idea and Craft categories, which value initiatives that manage to effectively combine production and design elements to convey the message. Another campaign by the consultancy firm – ‘You’re a gamer and you don’t know it’ – for Multiópticas, was also shortlisted at the event.

For Julio Alonso Caballero, Executive Creative Director at LLYC, “To be recognized once again at the ANDY Awards is a source of pride for us and spurs on all the teams involved. It is not easy to always find clients as brave as BBK and Multiópticas that dare to employ this new form of communication, and hence we are particularly pleased that the jury has chosen to reward them”.

The International ANDY Awards, organized by The Advertising Club of New York, is one of the most important international advertising festivals with a great track record over the last 50 years. They award excellence in creativity. The jury was made up of representatives from the main agencies and advertisers in the world.

About the winning project

Bihar, choose the future: The BBK Foundation sought to promote sustainable competitiveness and its present and future effects for society through a series of actions that help educate society and raise awareness about this matter. The aim was to wake up a sleepy society and demonstrate how we choose our future with each of the decisions we take, stirring up the collective conscience through a campaign that people could identify with. To show BBK’s commitment to more sustainable models, our starting point was a persistent concern of our society, particularly among young people:  climate change and the future of our planet. A future which, for 75% of young people, is terrifying, and for which 56% even consider that mankind “is already doomed”. We installed a giant sculpture of the head of a girl in Bilbao Estuary, designed to appear and disappear according to the rising and falling tide. The sculpture and the short film produced based on it were designed to serve as a metaphor to represent the future for generations to come and show how we choose our own future with each action we take.